There’s been a bit of a shake up in the tax industry the past couple of weeks! Lots of changes are being 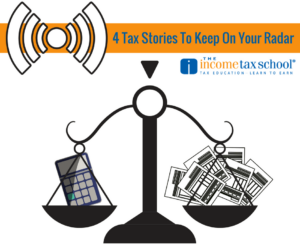 made (or trying to be made) that could have serious impacts on our roles as tax preparers and tax business owners. Here are 4 stories you should be aware of and following closely.

Early this week the IRS announced the suspension of PTIN registration and renewal. This is due to a court ruling that the IRS does not have the authority to charge fees for PTIN registration and renewal, and was ordered to refund the money collected in PTIN fees to tax preparers. The IRS is still allowed to require registration, however currently the system is down. This will likely not be the end of the PTIN issue as the IRS is working with the Department of Justice and has filed an appeal.

What you should know:

Accounting Today has a great overview on the case for more details.

Meanwhile in the White House, the Office of Management and Budget released President Trump’s 2018 budget. This proposal includes several tax related items, one of which would allow the IRS to regulate tax preparers. The proposal would “Increase oversight of paid tax return preparers.”

This could mean the IRS will start requiring tax preparers to complete their Annual Filing Season Program, which is currently voluntary.

Reforming the tax code is a priority right now for the White House. In fact, according to the White House website, the President wants to lead “the most significant tax reform legislation since 1986 – and one of the biggest tax cuts in American history.” The changes proposed include:

Currently, Speaker of the House Paul Ryan is pushing his own tax plan, one that only Ryan seems to be excited about.

Senate Republicans are still working on a bill that will repeal the Affordable Care Act. Repealing could mean a few things. For one, there’s the individual mandate to have health insurance (and the penalty if you don’t). There’s also the employer mandate that requires employers to offer affordable coverage. The IRS was charged with enforcing those mandates, which meant tax preparers had to submit additional paperwork in each case. All of that could change if the ACA is repealed.

A lot of things are still up in the air as there is yet to be a plan to replace the ACA.

All of these stories could have a major impact on our industry and businesses. It’s important that we stay on top of them and offer up advice and updates to our clients as we learn more.